In a new study, researchers from the Alfred Wegener Institute, Helmholtz Centre for Polar and Marine Research (AWI) show for the first time that marine litter can even be found at the sea surface of Arctic waters. Though it remains unclear how the litter made it so far north, it is likely to pose new problems for local marine life, the authors report on the online portal of the scientific journal Polar Biology. Plastic has already been reported from stomachs of resident seabirds and Greenland sharks.

Plastic waste finds its way into the ocean, and from there to the farthest reaches of the planet — even as far as the Arctic. This was confirmed in one of the first litter surveys conducted north of the Arctic Circle, carried out by an international research team from the Alfred Wegener Institute, Helmholtz Centre for Polar and Marine Research (AWI) and Belgium’s Laboratory for Polar Ecology. The researchers presented their results in an article released on the online portal of the journal Polar Biology.

In order to gauge the level of pollution, the researchers took advantage of an expedition that brought the research icebreaker Polarstern to the Fram Strait, the area between East Greenland and Svalbard. In July 2012, AWI biologist Dr Melanie Bergmann and her team searched for litter floating on the sea surface from the ship’s bridge and by helicopter, maintaining a “litter watch” for a combined distance of 5,600 kilometres. “We found a total of 31 pieces of litter,” reports Bergmann.

Although this number may sound low, it confirms that there is indeed litter floating in the remote Arctic Ocean. “Since we conducted our surveys from the bridge, 18 metres above sea level, and from a helicopter, we were only able to spot the larger pieces of litter. Therefore, our numbers are probably an underestimate,” the marine biologist explains. It is well-known that, with time, plastic breaks down into small fragments at sea, which can only be detected properly by analysis of net tows. 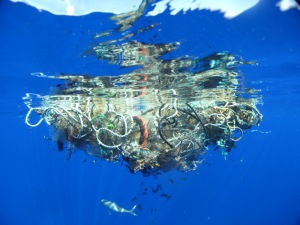 The plastic litter reported from the Fram Strait could be leaking from a sixth garbage patch, which may be forming in the Barents Sea according to computer models. Such accumulation zones are created when large amounts of floating plastic debris are caught by ocean currents and concentrate in the centre of gyre systems.

We currently know of five garbage patches worldwide; the sixth patch in the Barents Sea is most likely in the early stages of formation. Bergmann believes it may be fed by the densely populated coastal regions of Northern Europe. “It is conceivable that part of that litter then drifts even farther to the north and northwest, and reaches the Fram Strait,” states the AWI biologist, adding, “Another cause for litter in the Arctic could be the retreat of the Arctic sea ice. As a result more and more cruise liners and fish trawlers are operating further north, following the cod. Most likely, litter from the ships intentionally or accidentally ends up in the waters of the Arctic. We expect this trend to continue.”

In a previous study, Melanie Bergmann analysed photographs from the deep Arctic seafloor for signs of plastic, glass and other types of litter. Her conclusion: in the time frame of ten years the amount of litter in the deep sea has doubled with densities in a similar range to those from southern Europe. In fact, the litter density on the deep seafloor of the Fram Strait is 10 to 100 times higher than at the sea surface. “On the deep Arctic seafloor, we found an average of 2.2 to 18.4 pieces of litter per kilometre of our route. This indicates that the deep seafloor may be the ultimate sink for marine litter,” Bergmann suggests.

The above post is reprinted from materials provided by Alfred Wegener Institute, Helmholtz Centre for Polar and Marine Research. Note: Materials may be edited for content and length.

Source: Plastic litter taints the sea surface, even in the Arctic: For the first time, researchers survey litter on sea surface at such high latitudes — ScienceDaily