Our solar system is a fascinating place.

For decades, ambitious engineers and scientists around the world have been sending brave humans and robotic emissaries deep into our solar system to see what they could find.

The Cassini spacecraft has revealed previously unknown truths about Saturn and its moons and, now, NASA’s Juno spacecraft is beaming back more detailed information about Jupiter than ever before. NASA’s New Horizons spacecraft flew by Pluto in 2015, getting the first close-up looks humanity has ever had of the dwarf planet. Since the flyby, NASA has released new, high-resolution views of Pluto each week. Plus, two rovers are still roaming Mars to hunt for signs of possible past life and interesting geology.

These missions and many more have produced incredible photos and science for people on Earth to parse through. For every answer, though, there are a dozen more questions that need to be studied: What other dwarf planets are there in Pluto’s part of space? Was there once life on Mars? Can humans make it to Mars safely? Does an icy moon of Saturn or Jupiter currently play host to microbes?

The sun, our nearest star, formed more than 4 billion years ago, condensing from a cloud of gas and dust that eventually gave rise to the rest of the solar system.

Planets, protoplanets, asteroids and comets arose from the planetary disk surrounding the sun after it first formed, and today, the star still influences this part of space, for better or worse.

The star’s light and heat are responsible for the diversity of life on Earth, but if it were ever to shoot off an extreme solar flare toward the planet, it could seriously harm our way of life. A fleet of spacecraft — like NASA’s Solar Dynamics Observatory — keep an eye on the sun to learn more about the mysterious machinations of the star and try to predict when harmful flares might reach Earth.

By studying the sun, scientists are also able to gather more data about what other stars out in the far-reaches of the cosmos might be like, adding to our understanding of other planets.

Mercury is the smallest “major” planet, and the closest to the sun.

The hot world is pocked with craters and completes a full orbit of the star in 88 Earth days, but the small planet — which is only slightly larger than the moon — may also host pockets of ice deep inside its craters.

NASA’s Messenger probe orbited Mercury from 2011 to 2015 when it was intentionally crashed into the planet at the end of its service life. The first craft to visit Mercury was Mariner 10 during flybys from 1974 to 1975.

For the moment, NASA and other space agencies are not operating any spacecraft in Mercury’s vicinity, but that may not last for long.

The European Space Agency is planning to launch a spacecraft called BepiColombo to Mercury in order to learn more about the composition of the little planet near the sun. If all goes according to plan, the two orbiters that comprise the mission should make it to Mercury by 2024, assuming it launches on schedule in 2018.

29 million miles at its closest point

43 million miles from the sun at its farthest point

Venus is a beautiful, swirling enigma of a planet.

The cloudy world actually represents the closest thing Earth has to a “twin world” in the solar system, but it’s probably not a place you’d like to visit.

Missions have shown that Venus’ surface is a blistering 864 degrees Fahrenheit, and it’s surface pressure is extreme. According to NASA, standing on the surface of the planet would probably feel something like the crushing pressure you’d experience when deep in the ocean.

In 1978, the Soviet Union’s Venera 12 lander touched down on the planet and beamed back images and data for 110 hours before succumbing to the planet’s harsh environment. Many other Venera spacecraft also landed on the planet.

At the moment, Japan’s Akatsuki space probe is in orbit around Venus, photographing the planet’s atmosphere and learning more about the cloud-covered world.

67 million miles from the sun

Earth is our home and, at least for the moment, the only place humans can live in this universe. By studying our planet, we might one day figure out more about how life could evolve elsewhere in the cosmos.

In fact, our knowledge about Earth, much of which comes from the hundreds of satellites designed to stare at our planet from above, can help astrophysicists scan the heavens for habitable planets.

Scientists can use the data collected by these spacecraft above Earth to model what an “Earth twin” — an alien planet just like ours circling a sun-like star — might look like hundreds of light-years away.

Of course, the satellite data is primarily used to peer down at the oceans, cloud cover, forests and other constantly changing features that can reveal much about climate change and day-to-day weather systems.

Distance from the sun 93 million miles

142 million miles from the sun

Mars, the beautiful red planet, is the future of exploration for humanity.

NASA engineers and scientists are aiming for the red planet in the coming years. In the next two or three decades scientists are hoping to land astronauts on Mars in order to explore the mysterious world from close range.

And NASA isn’t the only organization aiming for the rusty world. Elon Musk, the founder of the private spaceflight company SpaceX, is also planning to develop technology that could one day launch and land people on the surface of Mars. Musk plans to one day help found a city on the red planet, allowing it to function as a second home for humanity.

Mars has likely gone through ice ages that turned it mostly white from Earth’s perspective in its relatively recent history, and in the ancient past, at least part of Mars was once habitable for microbial life, according to results from NASA’s Curiosity rover.

Mars also has two moons — Phobos and Deimos — which were once thought to be captured asteroids, but new data suggests that the two moons are leftovers from a large impact that resulted in a ring of debris around Mars millions of years ago.

Scientists and engineers have sent fleets of spacecraft to orbit and land on Mars through the decades. Both Curiosity and the Opportunity rovers are currently beaming back data from the planet’s surface, while the Mars Reconnaissance Orbiter and India’s Mars Orbiter, among others, are collecting information from orbit.

The cratered world was thought to be a full-fledged planet and an asteroid at one time or another, but now, Ceres, like Pluto, is considered a dwarf planet — a world that’s not a moon, is round but is in a part of space with other objects of similar size.

Ceres is also getting its first close-up thanks to NASA’s Dawn spacecraft after the probe spent 2011 to 2012 orbiting the asteroid Vesta, another object not terribly far from Ceres in the asteroid belt between Mars and Jupiter.

Jupiter, the largest planet in the solar system, is a beast. It plays host to at least 67 moons, and the planet’s part of space is extremely dangerous for anything venturing near it.

When Juno was entering orbit around the planet, scientists were worried that the planet’s radiation environment would destroy the spacecraft’s instrumentation. So engineers built a vault around the craft’s sensitive instrumentation to keep it safe during the orbit insertion.

Juno survived the harrowing journey into the massive planet’s orbit intact, and the probe is now sending back incredible, close-up images of Jupiter.

The spacecraft is using its tools to peer into Jupiter’s clouds and figure out what’s going on inside the planet’s core, including determining how its magnetic field is produced. The Juno mission comes after NASA’s Galileo craft orbited Jupiter for years before crashing into the planet’s atmosphere in 2003, ending its mission.

484 million miles from the sun

886 million miles from the sun

Saturn — the ringed wonder of our solar system — is a beautiful world seen through the mechanical eyes of the Cassini spacecraft.

The planet has seven rings that stretch 175,000 miles out from the planet, according to NASA, and its year is equivalent to 29 Earth years.

“When Galileo Galilei was observing the planet in the 1600s, he noticed strange objects on each side of the planet and drew in his notes a triple-bodied planet system and then later a planet with arms or handles,” the NASA website states. “These ‘handles’ were in fact the rings of Saturn.”

Saturn’s more than 50 moons are also worthy of attention.

The planet’s moons and rings are like a solar system all its own, and the entire system is shot in moody black and white by Cassini.

Cassini will keep orbiting Saturn, taking photos of the planetary system, until 2017, when the spacecraft ends its mission by burning up in the planet’s atmosphere.

Saturn’s large moon Titan and small icy satellite Enceladus may both have the chemistry to support life in subsurface oceans within the moons.

Uranus is the weirdo of the solar system.

The cold gas planet is tilted on its side, a leftover effect of a major collision early on in the solar system’s history. Uranus also has 13 rings and 27 known moons named for Shakespeare plays and Alexander Pope novels.

Uranus is still something of a mystery.

Only the Voyager 2 spacecraft has visited the distant world located 1.8 billion miles from the sun.

1.8 billion miles from the sun

Neptune, the blue-tinted ice giant, is located about 2.8 billion miles from Earth.

Scientists have used powerful telescopes to look at the world’s atmosphere and spot storms brewing above the planet, but much remains unknown.

“Neptune is mostly made of a very thick, very hot combination of water, ammonia, and methane over a possible heavier, approximately Earth-sized, solid core,” NASA said.

Like Uranus, Neptune has only been seen from close range by NASA’s Voyager 2.

2.8 billion miles from the sun

PLUTO, THE KUIPER BELT AND BEYOND

Until 2015, humanity had never gotten a close look at Pluto, the much-loved dwarf planet out beyond Neptune’s orbit.

In July of that year, NASA’s New Horizons spacecraft flew by Pluto, giving us our first look at the fascinating world’s surface in closeup.

No one expected what they found.

Instead of a cold, cratered rock, New Horizons discovered a dynamic world filled with towering mountains made of water-ice and chilly plains filled with nitrogen ice that belies active geology.

The dwarf planet comes complete with its very own heart, 3.7 billion miles away from the warmth of the sun.

Pluto’s part of space is known as the Kuiper belt, and it isn’t the only icy object in that distant part of the solar system.

There may be one more object lurking on the outskirts of the solar system to consider.

A study suggests there could be a “ninth planet” in a very eccentric orbit circling the sun from afar and only completing its circuit of the sun once every 10,000 to 20,000 Earth years.

There isn’t any direct evidence for the ninth planet yet, but scientists are still hunting, meaning no one yet knows what the future may hold for our understanding of the solar system. For now. 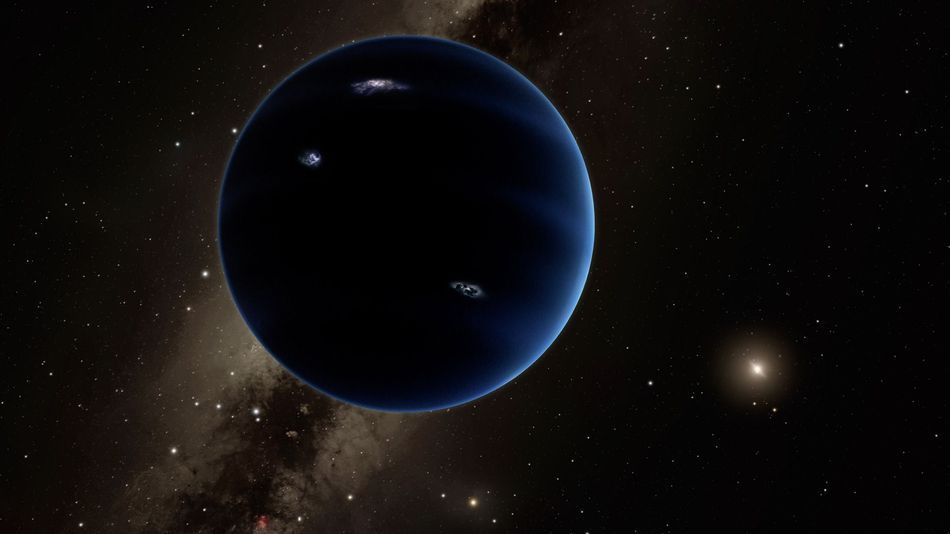 Source: From the sun to planet nine: A stunning tour of our solar system